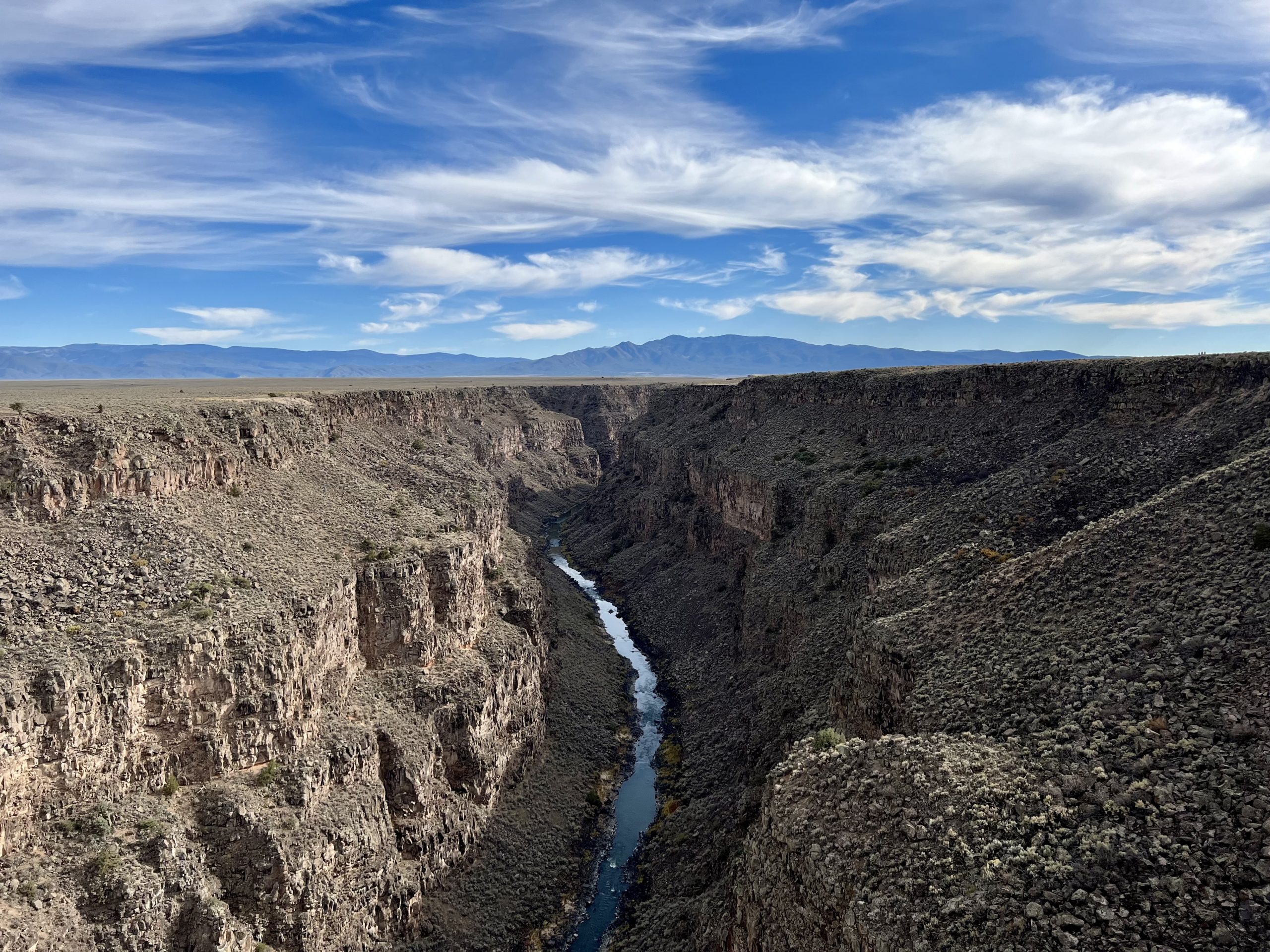 When your body speaks, listen.

Jeff stood at the cliff’s edge. As he looked down, he couldn’t believe how steep and deep the gorge was. He had never seen a place that evoked such awe and fear at the same time, a terrifying abyss and pure beauty. The Gorge Bridge in Taos is an incredible place where people celebrate their love, symbolized by locks on the fence and their initials engraved on the railing. It is also a place where people try to end their lives. A crisis hotline sign is tied to the fence as well. This contradiction was something Jeff knew intimately, especially when he lost his job a few years ago and finalized his divorce all at the same time. Just thinking about it, his heart began to race, his hands felt wet, his breathing got shallow, and he was sweating.

Through therapy, he had learned to check in with himself and read his body’s physical signs. I am scared, he recognized as he looked over the edge. A part of him wanted to run away from the feeling as fast as he could. But he knew better. Instead, he slowed down his breath, leaned into his heart, and thought of his Accelerated Experiential Dynamic Therapy (AEDP), imagining what I would say to him:

“Let us make some space and feel here together. What is the fear about? If your heart could speak, what would it say?”

He breathed and slowed his heart rate. His body calmed, and his feelings shifted from anxiety to gratitude for all the healing he had done. He also noticed himself feeling proud of his strength and resilience as he stood over the gorge.

In the past, if he had noticed any fear response in his body, he would immediately get anxious and fidget and grab his phone to distract himself by checking the news and the stock market. But now, Jeff understood that his biggest fear was feeling anything at all.

Jeff grew up in a home where no one ever brought up emotions. His parents both believed the way to thwart pain was to toughen up, work hard, depend only on themselves, and rationalize emotions as a weakness and a total waste of energy and resources.

He had come a long way since. Jeff was able to recognize that the gorge scared him because it reminded him of those tough times in his life, and his body told him about his emotions through physical expressions. Taking a deep breath, he noticed a sense of relief and relaxation in his chest and a sense of gratitude and pride in himself for having stuck through self-knowledge and self-reflection.

He was grateful for his guide, his therapist, who was there every step of the way. His body calmed down his fear, too, just in time for the sun to start setting. The colors turned yellow and orange, and he felt the warmth and joy that was comfortable and happy.

In AEDP therapy, feeling emotions in a safe place with a trusted therapist is the first step to understanding our anxiety and fears. Because we tend to push away difficult emotions, which are key to our emotional health, this practice of slowing down, investigating the emotions, and being supported by a therapist is very powerful and unlocks the door to deep healing.

Jeff and I had quickly identified how his childhood had gotten in the way of expressing his emotions. Like his parents, he had always been self-reliant in his childhood home, marriage, and work environment. Focusing inward and paying attention to his emotions felt like a waste of time to him. In fact, doing that brought up anxiety and made his heart rate go even higher.

As I wrote in another blog post “What your anxiety is trying to tell you?” all emotions are expressed through our physical body. The physical and psychological manifestations of anxiety and fear appear very similarly in the body. But an important distinction is that outside threats trigger fear while feelings inside us can trigger anxiety.

The good news is that core emotions, like fear, calm down when they are thoroughly and safely experienced in the body. Initially, Jeff trained himself in therapy to feel his fear and other emotions and slowly tolerate the discomfort they caused until they passed. Like riding a wave, emotions have their peaks, and then they gradually retreat.

Together, we faced Jeff’s fear with curiosity rather than avoidance, with slowing down and tuning in rather than distractions and rationalizations.

I reminded him that using deep breathing, anchoring himself on the chair, feeling his feet on the ground in the presence of a therapist or all alone in his day-to-day life are helpful ways to recenter himself and calm the nervous system before continuing his curious exploration of what his body is trying to communicate to him.

The idea, though, is not just about feeling better and moving on. It is about recognizing the feelings underneath the physical symptoms and spending time with them.

The same grounding, deep breathing, and slowing down of the body can also help with anxiety because it gives us space to be curious about what’s going on with us in the moment. When we’re slowing down, we can ask ourselves “Is this true fear or is this anxiety?” If we look at the situation and realize nothing dangerous is happening, then it’s not fear. It’s anxiety. That’s really good information to have.

Many things can trigger anxiety: something that happened to you when you were young, an old fear that no longer exists, etc. Perhaps you discover in addition to feeling anxious, you also feel angry, excited, or sad.

All of these core emotions are responses to stressful life events, past and present. When our core emotions are too difficult to face, they get stuck inside of us and can cause us to feel sick, have emotional pain, or experience a feeling of being completely disconnected.

The good news is that with time and curiosity, we can move through anxiety and begin to feel better.
To do this, make sure you do not act as a judge of your emotions, naming them good or bad. Emotions are here to tell things about ourselves. They are messengers you need to listen to.