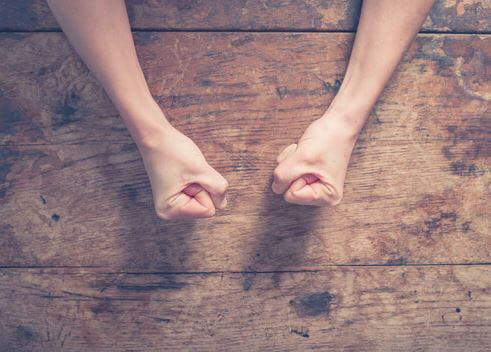 Controlling Your Anger with a Hiss

Everybody gets angry. It’s a normal, biological protection mechanism that gets triggered when we believe we’re being mistreated or that the world is operating against us. It is also an expression of fear and deep hurt.

Anger is a difficult emotion because its intensity can get expressed at top speeds in destructive ways: we yell, say mean things to people, we punch walls, slam doors, throw things across the room, etc. These forms of expression are scary, can damage important relationships, and are ultimately detrimental to our sense of wellbeing.

Anger can also cause us to retreat. Many people downplay their anger and internalize it because they are afraid it will hurt someone or something important to them. But internalizing anger can be just as destructive as expressing it intensely. We end up trapping the anger in our bodies and not protecting ourselves from the thing that hurt us in the first place.

Sam is a thirty-seven-year-old man who walked into my office fuming. He had just found out his wife, whom he loved dearly, was having an affair, and he was profoundly disturbed by the news. “Who is she?” he asked himself repeatedly. “What is this marriage?” The world he knew was crumbling, and he felt profoundly angry.

During our sessions, he would list all the ways he had been a good husband, a good dad, and a good provider. As he did, I could feel the anger raging inside him. He would clench his fists and raise his voice. The injustice of it all made him furious, and his anger was an expression of all his confusion, pain, and disappointment. “It is not fair!” he would shout.

When he first heard the news, Sam’s impulse was to insult his wife and treat her as a lesser person, someone who was deficient in honesty and authenticity. During the session, he would rattle off all the hurtful things he wanted to say to her and all the ways he wanted to retaliate against her and teach her a lesson.

He was outraged, but he was also scared. He worried that if his wife knew the extent of his intense anger, it would destroy her and ruin whatever was left of their relationship. To his credit, Sam was looking for a way to share his anger but not let it get too destructive.

I told Sam a parable I learned about The Snake and the Swami.

On the train to Vrindavan, a Swami sits beside a common man who asks him if he has attained self-mastery, as the name “Swami” implies.

“And have you mastered anger?”

“You mean you can control your anger?”

“And you do not feel anger?”

“Is this the truth, Swami?”

After a silence, the man asks again, “Do you really feel that you have controlled your anger?”

“Then do you mean to say, you never feel anger, even–”

“You are going on and on–what do you want?” the Swami shouts. “Are you a fool? When I have told you–”

“Ah, but I have,” the Swami interrupts. “Have you not heard about the abused snake? Let me tell you the story.”

And so the Swami began:

“On a path that went by a village in Bengal, there lived a cobra who used to bite people on their way to worship at the temple there. As the incidents increased, everyone became fearful, and many refused to go to the temple. The Swami who was the master at the temple was aware of the problem and took it upon himself to put an end to it. Taking himself to where the snake dwelt, he used a mantra to call the snake to him and bring it into submission…The Swami then said to the snake that it was wrong to bite the people who walked along the path to worship and made him promise sincerely that he would never do it again. Soon it happened that the snake was seen by a passer-by upon the path, and it made no move to bite. Then it became known that the snake had somehow been made passive, and people grew unafraid. It was not long before the village boys were dragging the poor snake along behind them as they ran laughing here and there. When the temple Swami passed that way again, he called the snake to see if he had kept his promise…The snake humbly and miserably approached the Swami, who exclaimed, ‘You are bleeding! Tell me how this has come to be.’ The snake was near tears and blurted out that he had been abused ever since he made his promise to the Swami. ‘I told you not to bite,’ said the Swami, ‘but I did not tell you not to hiss!'”

This story helped Sam distinguish between destructive and necessary responses to his anger. In the end, Sam was able to make a firm yet the wholehearted request of his wife to stop hurting him and to pay attention to how her choices caused him deep pain. This restored his pride without destroying the emotional bond that was left between them, which was important to Sam.

How Can You Take Control of Your Anger?

Noticing our physical reactions to anger can slow down intense reactions and give us time to process our feelings.

Here’s an experiment: Try to remember the last time you were angry. What was happening, and how did you feel in your body? Did you sweat? Did your muscles tighten or your fists clench? Were you filled with adrenaline?

The range of physical reactions to anger seems to vary based on its causes. You might clench your teeth when your computer is being too slow or get red in the face when a driver cuts you off on the road. Not surprisingly, our most intense physical feelings of anger occur when someone hurts us emotionally or treats us poorly.

But if we know that when our teeth start to clench, it means we are getting angry, we can mitigate an intense reaction. We can say to ourselves, “Oh, my teeth are clenched. That means I’m getting angry. I should find a way to back away from the thing that’s making me angry and think about a way to solve it before it overwhelms me.”

Even this small moment of mindfulness on your part will reap loads of benefits. The more you recognize what’s happening in the body, the better you will begin to read your emotional triggers and start thinking constructively about how to change the situation.

As in the case of Sam, constructive action uses our anger to appropriately attend to a situation that is hurting us.

Try this: Imagine putting your anger into your backbone—that part of you that is sure of yourself, knows what it is you need and isn’t afraid to say it. From your backbone, approach the issue with a clear head and a calm but firm tone. For example, say: “It’s important to me that you share the chores with me,” or “It’s important to me that you don’t tease me when I’m serious.”

These types of assertions, which stay away from placing blame and correlate directly with our needs and not our anger, are usually well-received and respected.

Another way to take constructive action is by setting boundaries. Setting boundaries basically draws lines for people, so they don’t cross over into territory that hurts us. You can say: “I don’t want you criticizing me or calling me names. If I am doing something that is bothering you, let’s talk about it, respectfully,” or “I do not like it when you borrow my things without asking.”

If you get pushback, just stay calm, firm, and repeat your statement until you are heard.

Constructive action can also take the form of no action at all, especially when there is nothing that can be done. Getting angry at bad drivers can be frustrating, but the only thing we can control in that situation is our reaction to it.

Take a few deep breaths and recognize that it’s better to stay silent than to rage at the world outwardly.

Doing this is a form of self-compassion. You are acknowledging the useless toll anger has on you, and you are choosing not to engage in it, saving yourself and those around you a lot of tension.

In some cases, therapy can be an excellent form of constructive action, especially if our anger is inappropriate for the situation at hand. If someone makes an honest mistake and we yell at them for it, this can be a tip-off that old anger hanging around from childhood is to blame. Most likely, the old anger never got expressed and is trying to find its way out of your body, exploding in inappropriate ways.

If this is happening to you, it’s best to address the anger together with a therapist who can help you attend to the old issues, feel the feelings in a safe environment, and move on.

I hope this information helps you better handle your anger. Just remember, anger is a normal and an essential emotional response that keeps us protected from situations that work against us. How we process and constructively attend to that anger is what’s important. Think of Sam, the Swami, and the snake the next time you feel your blood start to boil!